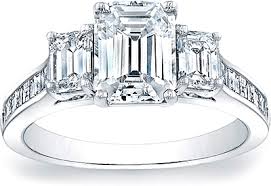 When choosing a ring one of the first decisions you will have to make is whether you want a single solitaire diamond or a coloured stone or a combination. You can also add various smaller or graduated stones on either side of the centre stone or on the ring band itself. When done correctly, the […] 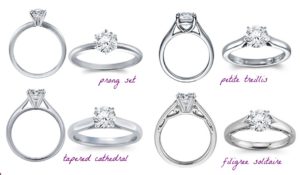 The most common and classic ring setting is called a prong setting. A prong is a little metal claw that grips the diamond tightly, holding it in place. Prongs can be rounded, pointed, flat, or V-shaped (the latter being the most common for princess-cut diamonds). V-shaped prongs are particularly important for wrapping the sharp or […] 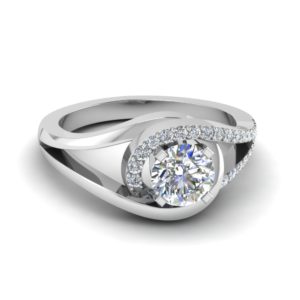 The shank refers to the band of the ring or the part that actually encircles your finger. Most shanks are rounded but there are also square-shaped shanks and other more creative shapes. The shank can also be of different thickness at either the front, back or sides and can vary in shape and style. A […]